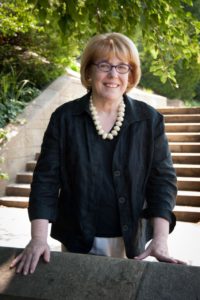 Meg Cheever can say a lot of things about how to build urban green space from the ground up, but as she retires after 22 years as Founding President and CEO of the Pittsburgh Parks Conservancy, she knows one thing for sure: “It’s impossible to overstate the importance of perseverance.”

Cheever, a Boston native, grew up loving the parks in her home city. Her early career as a lawyer brought her to Pittsburgh, where she worked for a law firm and a TV station. She transitioned into management and corporate planning and spent six years as publisher of Pittsburgh Magazine. And then she felt ready for a change.

She happened on a New York Times piece about the retirement of one of the founders of the Central Park Conservancy—who had attended Wellesley, just like Cheever.

“If they did that in New York,” she thought, “We could do it in Pittsburgh.”

This was the mid-1990s. With steel industry troubles causing financial woes, and a declining population, Pittsburgh’s parks “had begun to suffer from quite a lot of neglect.”

Cheever rallied with a group of locals, and they incorporated the new all-volunteer conservancy. Initially, they were the Schenley Park Conservancy, focusing on one historic park, but city leaders pushed them to broaden their name and their mission to the city’s four largest parks, and the group quickly re-emerged as the Pittsburgh Parks Conservancy.

Cheever left her job in publishing to become the Conservancy’s first staffer, even though it would be awhile before they had funding for any salaries. “We had no resources, except our own time and effort,” she remembers. “No-one had ever heard about us. It was a bit daunting.”

Raising money was tough. She remembers one time in particular that the non-profit, dangerously low on funds, poured their energy into a crucial grant application that got denied.

Hearing “no” when the Conservancy knew “the park system was a critically important asset for Pittsburgh” was “devastatingly disappointing,” Cheever says, but the group pushed on, gaining traction in the community, and eventually, the dollars they needed.

Today, the Conservancy has worked on projects in more than 20 of Pittsburgh’s 160 parks. At the end of her tenure in March, Cheever says, the non-profit had at least 12,500 donors, raised $108 million in 22 years, and expanded to a staff of 45.

Pittsburgh stands out for its topography, Cheever says. The city has about 90 distinct neighborhoods, and “we have very steep slopes and three rivers and a lot of creeks, so we have some magnificent views, but sometimes it’s not as easy as one might think to get from here to there.” Infrastructure and programming to connect the parks is vital. Today, activities range from flea markets and concerts to “owl prowls.”

One signature way of building the Conservancy’s “constituency” across different parks is the popular Spring Hat Luncheon, which is just what it sounds like (inspired by a similar event in New York). The Conservancy hosts an outdoor luncheon fundraiser for several hundred people (rotating annually between four park locations) on the first Saturday in May. This generates hundreds of thousands of dollars a year in general operating funds. The dress code is simple: any hat you want, and most attend in high style.

Extensive data informs all Pittsburgh park projects and programming, Cheever explains. Between in-person “intercept surveys” in the parks, phone surveys, and interviews with community leaders, the Conservancy analyzed remarks from about 1000 people.

“The consensus was amazingly simple,” she says. Park users “would enjoy our time in the parks and stay longer if our basic human needs were met.” That means accessible info on trails and amenities, rangers or staffers in visitor centers, maps and signage, a place to get food and drinks, and clean restrooms.

“We tried to remember those comments as watchwords for every project, and every project has supported every one of those things,” she says.

Those include reclaiming a five-acre parking lot, which became the 456-acre Schenley Park’s vibrant Schenley Plaza (opened in 2006), and a rebuild of an educational environmental center in Frick Park (opened in 2016) that now partners with more than 20 schools and hosts 80,000 visitors a year.

Community engagement was also crucial as plans for a new park in the Hill District fell through after locals’ feedback. Instead, neighbors suggested a revamp of an existing space, originally called Cliffside Park. Locals were so pleased with the result that they petitioned the city to rename it August Wilson Park, for the iconic playwright’s childhood home nearby.

One perk of Cheever’s retirement is more time for her to actually enjoy Pittsburgh’s parks, like Highland Park (revamped in 2005 with an entrance garden, a reflecting pool, restored reservoir, and fountain).

“When I just go over there myself to walk around, to me it’s the greatest example of what parks mean to society,” she says. Everyone is there: “all ages, all colors,” whole families, dads with strollers, dog-walkers, teens taking prom pictures. “And it wasn’t any kind of special event. It was just a well-maintained park.”