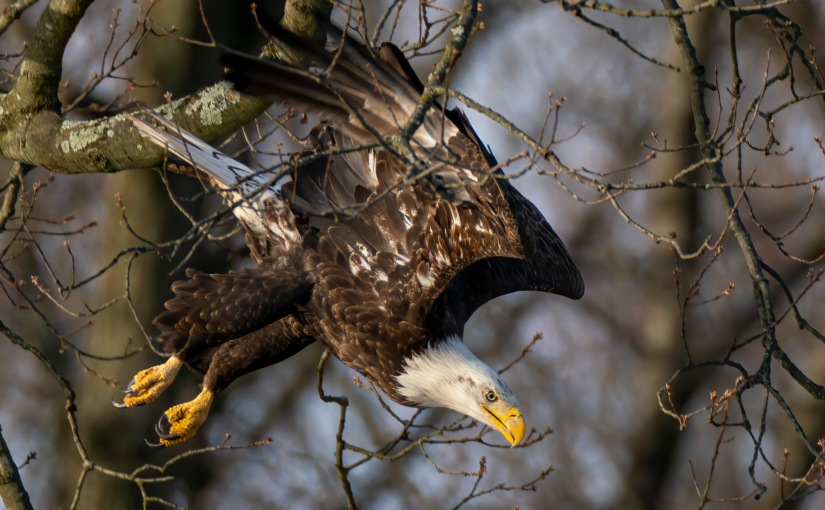 National Bird Day is a day to celebrate the different species in your state. What’s the name of that red one that shows up on your lawn? What about that brownish-blackish-spotted one you saw on your hike? The more you learn about the birds you see, the closer you’ll feel to nature, even the nature in your own backyard. And did you know it’s scientifically proven that bird watching relieves anxiety? Just Google “ornitherapy,” and you’ll see what I mean.

Once named “Penn’s Woods,” it’s no surprise that our state abounds with wooded areas for birds to call home. If you’re a city dweller in Philadelphia, the only birds you may think about are “Eagles” (go Birds!). But the truth is, PA is one of the most species–dense states in America–home to more than 435 different species. Beyond their songs, they benefit our forests in ways you may have not realized. So, in honor of National Bird Day, let’s meet a few of the feathered friends in our state. Silly-sounding in name but prestigious in title, the Ruffed Grouse is Pennsylvania’s state bird. The grouse is related to turkeys and is a year-round resident of our brushy young forests.

The bird is brown-feathered with white and black speckles across its head. What really makes the grouse unique is the very reason for the name. Around the neck, a male will display feathers, fluffed and full. It is nature’s warmest-looking scarf. Grouse, when not strutting the runway with an elaborate feather display, can be identified by the tuft of hair on their heads, messy like a bad hair day.

If you’re a patriotic Pennsylvanian and want a glimpse of our state bird, a great place to start is Hillman State Park, in Washington County. The park is a restored habitat made for the Ruffed Grouse. Looking to do more than see the Ruffed Grouse? So enamored with its fanciful neck collar and toupée-esque hairdo that you’re dying to help? The Ruffed Grouse population has been severely low from hunting. Visit the Ruffed Grouse Society website (https://ruffedgrousesociety.org) and make a donation or read about the conservation done to keep them safe. Don’t cry! The Mourning Dove is called that because of its monotone call: “OoOh coo coo coo.” Sound familiar?

Unlike something elusive like the Ruffed Grouse, the Mourning Dove loves a good telephone line, backyard, or weed-covered highway. While they’re closely related to the pigeon, they have differences. They’re like the pigeon’s cooler older cousin. (Sorry, pigeons.) Mourning Doves have golden bellies and a black spot next to their beak, a la Marilyn Monroe. That bird call? The one that sounds like weeping? That’s made by males to attract females. The ladies love it!

Mourning Doves do more than just hum funeral dirges; they also help the environment. By eating slugs and loose seeds instead of eating the seeds from a plant, they do little damage to the environment. While you can spot these doves on your way to work, they can also be found in state parks. Audubon has incredible conservation efforts to keep the Mourning Dove safe. Make a visit to Redtail Park or the John James Audubon Center and you’re sure to see one. Looking to play a part in helping these doves survive? Take part in the Audubon Birdathon! https://p2p.onecause.com/audubonbirdathon The crow is judged by most humans (or at least by some superstitious folks) as bad luck. They remember faces and hold grudges, so never cross a crow. With their black feathers and smart brains, they’re basically the Wednesday Addams of birds. And they’d never be caught dead wearing white after Labor Day.

Crows also have acute senses of hearing. As a sentry bird, a crow stands guard while others feed, waiting to alert others if a stranger comes for a bite. Crows are opportunists with food. They are fond of eating carrion. But they aren’t only interested in carcasses. They’re omnivores, delighted by the taste of grains and insects.

While this is one bird you may not be interested in watching besides the unplanned sightings that make you shudder, their qualities are intriguing to learn –so much so that you may want to see them yourself! Visit Natural Lands’ Crow’s Nest Preserve in Elverson for some great viewing and trails. Unless you owe a crow money, and in that case, never show your face to them again. You catch a glimpse of an unnatural red – so bright against the snow, that you’re astounded. That red flapping through the trees is bound to be a Northern Cardinal. Crimson with a black face, these birds are conspicuous. And while the color is one of its well-known features, only the male is red. Females are brownish with red-edged feathers.

Be wary of reflective surfaces. Cardinals experience periods of looking to mate (or cuffing season, as kids call it these days) and get aggressive. So much so that they’ll fly into windows and mirrors hoping to attack a competitor, which winds up being their reflection.

While the cardinal is the official bird of seven states; the oldest cardinal ever found was in Pennsylvania at 15 years of age! You may not have to leave the house to see this celebrity of a bird. They’re found flocking to bird feeders left in your backyard. Get some seeds and try to catch a glimpse of that red.

If you’d prefer to head into the outdoors to watch, the Peace Valley Park Nature Center in Bucks County is a great option. Cardinals are seen in low shrubbery so be extra sure to check those on your trip.  https://www.peacevalleynaturecenter.org We couldn’t possibly leave out the Bald Eagle (not just because of those Philadelphia Eagles, honestly!) Their eyesight is the sharpest of any animal in the world, including us! This vision comes in handy when waiting on a branch to spot a fish in a stream. Soaring down at lightning speed, they scoop up a trout just like that.

They tear apart prey, mostly consisting of scavenged carcasses, like unwrapping a present. And as the country’s emblematic bird, they have a superiority complex when it comes to food. As a pirate of the forest, they will attack another bird if it has dinner that the eagle wants.

In honor of National Bird Day and Save The Eagles Day (January 10), making a trip to witness a Bald Eagle can be an enlightening experience. The Promised Land State Park in the Poconos Plateau is home to wintering eagles looking to be near mountains and open waters. Take a peek at what this park has to offer and be sure to not make any loud noises! (https://www.dcnr.pa.gov/StateParks/FindAPark/PromisedLandStatePark/Pages/default.aspx)

Participating in National Bird Day can be as simple as learning about the birds seen in your neighborhood. Push yourself to take a trip to the park and see what you can find from the list. A ruffled-necked turkey-like bird? A grudge-holding black specter? Or even a red-feathered friend chasing down your bicycle mirror? You can even grab a bird pic for a perfect Insta post. Grab your camera and a pair of binoculars and head into the outdoors to celebrate Pennsylvania birds in all their majesty!

Local parks are a great place to start doing some bird watching. Fly over to our local park finder here:  https://maps.dcnr.pa.gov/localparks/

Rick Fichter, an accomplished wildlife photographer. He began his journey with photography in 1996, shooting for the Philadelphia Flyers and Phillies, and eventually transitioned into a professional nature photographer. Right now, he is focusing his efforts on photographing predatory birds, occasionally branching out to snare some shore birds as well.  He has a talent for capturing the powerful emotions of these majestic animals in vivid detail. His photographs of the American Bald Eagles are some of the most breathtaking images in circulation today.